Cambodia is located in Southeast Asia on the Gulf of Thailand. It borders with Thailand, Laos and Vietnam, the capital of Cambodia is Phnom Penh. Particular geographical features are Lake Tonle Sap and the Mekong, one of the ten longest rivers in the world.

Cambodia became known for the remains of the architecture of the early medieval Khmer empire that are still visible today. The main tourist and most developed cities are the capital Phnom Penh, Battambang, the second largest city in the country, Sihanoukville, the coastal city in the south on the Gulf of Thailand, and Siem Reap. From here you can also reach Angkor Wat, one of the most interesting destinations on the Cambodia trip.

Angkor Wat is the largest temple of the Siem Reap anchor complex – a large area with many temples from the period 850 – 1200. Another city worth seeing is Kampot, here is also the Boker Hill National Park.

You can find impressive buildings in typical Khmer architecture in Cambodia. This culture also influences traditional dances and literature. Cambodia identifies with the Khmer history and derives its national pride from it.
One can see that the traditions are deeply rooted in the everyday life of the population. Cultivating the Khmer culture is very important to Cambodian people. The Angkor temples play a central role in this.

The dances also contain traditional basic elements, without which the development of dance styles in Cambodia could not have taken place. The popular shadow play is intensively operated in Cambodia and is a fascinating leisure activity with style and dynamism. Art is blooming again in Cambodia. In this way, monuments and stupas are created again, they are restored by state funds. The Buddhist temples of ancient times, which are important for regional culture, are being restored with local donations.

Form of government: Cambodia has been a parliamentary monarchy since 1993, the constitution dates from the same year. The Parliament (National Assembly) is made up of 123 members. Cambodia has been independent of France since November 9, 1953.

Language: The official language in Cambodia is Khmer, 95% of the population speak this language. French and English are also used as educational and commercial languages. Chinese and Vietnamese are also spoken.

Local time: CET + 6 h.
In Cambodia there is no change between summer and winter time.
The time difference to Central Europe is +6 h in winter and +5 h in summer.

Cambodia is bordered in the northwest by Thailand, in the northeast by Laos and in the east by Vietnam. In the southwest there is a 443 km long coast to the Gulf of Thailand.

You can find an accurate topographic map of Cambodia here.

About two thirds of the country is in the Cambodian Basin, reaching a maximum height of 30 m. The Tonle Sap Lake is also located here and is connected to the Mekong by the Tonle Sap River.

There are numerous islands off the southwestern coast.

About three quarters of the country’s area is covered by tropical rainforest. The fertile plains are crossed by rivers. The capital Phnom Penh is located at the confluence of the Mekong and Tonlé.

This map of Cambodia’s population distribution was created by the Worldmapper team. Densely populated areas appear bloated, the area of ​​sparsely populated areas is reduced. The shape of the grid has been preserved; an underlying map with the original geographical extent helps interpret the map. The distorted map should help to present abstract statistical information clearly. 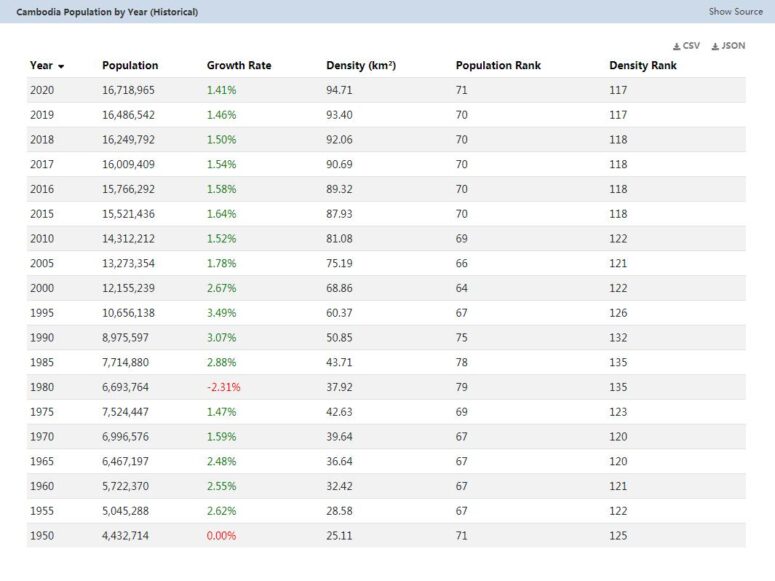 The climate in Cambodia is tropical-monsunal, the rainy season is between May and October. During this time, the southwest monsoon transports large amounts of water to Cambodia, 70 to 80% of the annual rainfall falls in this period. The rains mostly occur in the afternoon, the highest temperatures are just over 30 ° C. During the rainy season, the country’s largest river, the Mekong, grows enormously and floods surrounding regions. Due to this flood, the flowing Tonle Sap River changes its direction of flow, fills the Tonle Sap Lake, which expands to three times its normal size. dry season prevails from December to April. With north-east winds prevailing at this time, there is almost no precipitation at all. It is sunny with temperatures up to 40 °C (the hottest month of April). The air humidity is more than 90% in the rainy season and less than 50% in the dry season.