The Hashemite Kingdom of Jordan is located in the Near East, in the Middle East. It borders Israel, the West Bank occupied by Israel, Syria, Iraq, Saudi Arabia and the Red Sea on the Gulf of Aqaba, where it has a maritime border with Egypt.

Jordan is one of the so-called Maschrek countries. The landscape is characterized by mountains, large plains, valleys and fissures and to a large extent by desert and semi-desert. The highest peak is in the south and is the Jabal Rum at 1,734 meters. The only coast in the south of the country stretches for 26 kilometers. The largest cities are the capital Amman, Zarka, Irbid, Salt, Kerak, Aqaba, Jerash, Madabah, Ajlun and Tafila.

The most interesting destinations for a short vacation or a longer stay in Jordan are the old Greek Orthodox Church in Madaba, Mount Nebo near Madaba and the Roman city in Jerash. Aqaba is the only port in Jordan. The Gulf of Aqaba is primarily known to tourists as an excellent diving area.

Jordan’s economy has been in an ever increasing crisis for some time. The cause here is stagnating trade and the associated unemployment. Regional political problems are particularly hard on the economy in Jordan.
The UN sanctions against Iraq have also affected Jordan. In the pre-Gulf wars, trade with Iraq accounted for approximately two fifths of Jordan’s total trade.

An agreement between Jordan and the EU in 1997 is intended to slowly admit the country to the World Trade Organization, a step that should ensure Jordan’s economic stability.
In Jordan, only five percent of the country’s total area is used for agriculture. This is mainly due to the fact that only a small part of Jordan can be described as fertile. Another problem is that Jordan is very dry. Watering the grown fruits and vegetables is very expensive. As a result, agricultural products in Jordan make up only 2 percent of gross domestic product.

Form of government: Jordan has been a parliamentary monarchy since 1952, the constitution dates from the same year, the last constitutional change was made in 1992. The bicameral parliament consists of a House of Representatives with 80 members and a Senate with 40 members. Jordan has been independent of the UK since 1946.

Language: The official language in Jordan is Arabic, English is often spoken within the upper and middle class. 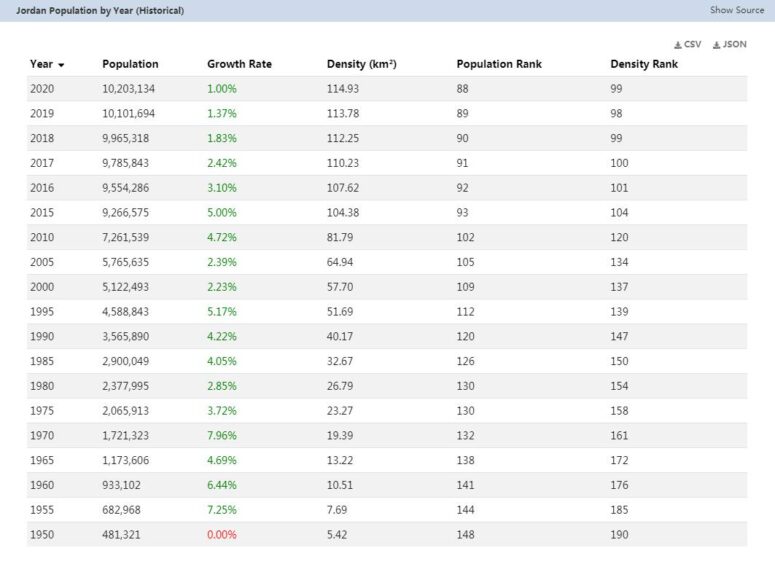