The Maldives is an island country in the Indian Ocean off the southern tip of India. The Maldives consisted of 1,190 flat coral islands, around 200 of which are inhabited. 87 islands are reserved for tourists. The islands are surrounded by coral reefs. Hundreds of these islands form together in other coral banks an atoll that surrounds a lagoon.

Due to its location in the mostly calm Indian Ocean, the Maldives have a constantly hot, tropical climate. Even at night, temperatures rarely drop below 25 degrees. The island’s capital is Male.

The fantastically beautiful, flat islands in the Indian Ocean make bathing vacationers, water sports enthusiasts and divers an unforgettable dream vacation possible. Most of the 87 resort islands are located on the Male Atoll but also on Vaanu, Baa, Lhaviyani and the Alifu Atoll.

The resorts offer a wide range of leisure activities for tourists. You can rent diving equipment or sail on the Maldivian dhoni sailboats, deep sea fishing, snorkeling and windsurfing. Most resorts also have tennis or badminton courts.

The environment is not high on the Maldives on the agenda. For each island that is used for tourism, a separate waste incineration plant and a seawater desalination plant were built. Electricity is required for operation, which is produced by using diesel generators. You even separate the garbage here. Plastic and metal waste are unloaded on the specially acquired waste island Thilafushi.

All other islands just throw their garbage into the sea. However, it is much more dramatic that many boats and generators are not properly maintained and waste oil cannot be disposed of properly either.

The impact are already clearly noticeable. While the environmental offenders who do not comply with the law are not punished, hotel complexes that also violate the guidelines can be driven up. However, it has already been realized that dumping rubble in the sea destroys the beautiful reefs and some national parks and protected areas have been set up.

Highest point: unnamed point on the island of Wilingili in the Addu Atoll, 2.4 m

Form of government: The Maldives has been a presidential republic since 1968, which is represented in the Commonwealth. The constitution dates from the same year and was last changed in 1998. The unicameral parliament (Majlis) is made up of 50 members. The approximately 1,200 individual islands are managed in 20 atolls and a capital district. Each atoll is managed by a chief of atoll appointed by the president. The Maldives has been independent of Great Britain since July 26, 1965.

Head of state and head of government: President Mohammed Waheed Hassan, since February 7, 2012

Language: Maldivian Dhivehi (dialect of Sinhala), English is spoken by most officials.

Local time: CET + 4 h.
There is no changeover between summer and winter time in the Maldives.
The time difference to Central Europe is +4 h in winter and +3 h in summer.

The island state of the Maldives is located in the Indian Ocean about 500 km southwest of the southern tip of India. The Maldives consist of 26 atolls with a total of 1,190 islands. Only 220 of the islands are inhabited by locals, and an additional 87 are used for tourism. The north-south extension is 823 km. The equator in the north of the islands is not crossed.

The Maldives are on the Maldivian ridge, a flipped and sunken edge of the Indian continental plate. Unlike Hawaii, for example, its origin is not volcanic. The average height of the islands is only 1 m, the highest point reaches 2.4 m. Therefore, the Maldives are particularly at risk from rising sea levels.

The reefs surrounding the islands are the only protection against sometimes severe cyclones in the monsoon season. Most of the inhabited islands have a dense tropical vegetation, including palm trees and breadfruit trees, while the uninhabited islands are characterized by low shrubs.

The sandy beaches are surrounded by clear lagoons that are bordered by reefs to the sea.

The Maldives are divided into islands for locals, the so-called local islands and tourist islands (including Bandos, Kuramathi, Meerufenfushi and Vabbinfaru). Local people can enter the tourist islands if you work there as staff. Conversely, tourists are usually only allowed to visit doe local islands on guided tours. State exemptions are rarely granted.

About a third of the population lives on the main island of Malé, which is also the only city in the island state. Malé is the city with the highest population density in the world: between 80,000 and 90,000 people live on two square kilometers. 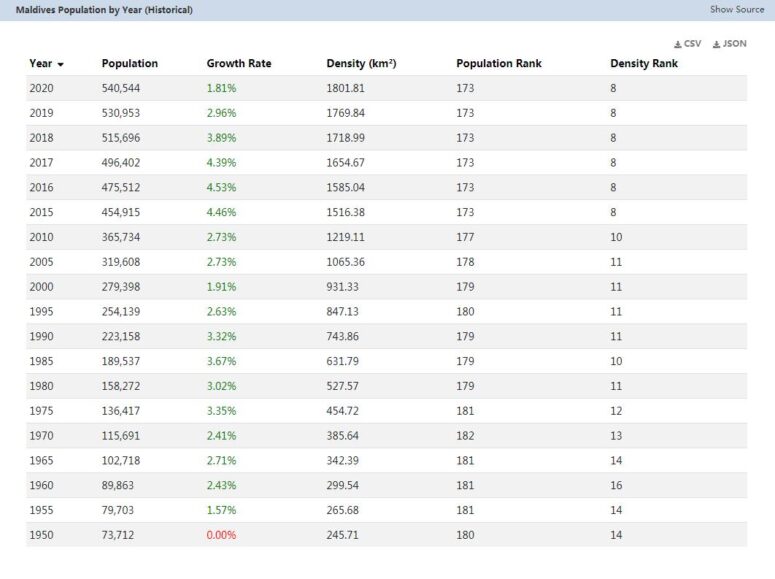