Kyrgyzstan is a mountain country that is largely met by the Tian Shan mountain range and its foothills westward. The mountains extend mainly in the east-west direction. The entire 40% of the country’s territory is over 3000 meters above sea level. Highest is Pik Pobedy (7439 meters), Tian Shan’s highest mountain, on the border between Kyrgyzstan and China.

The lowest point is 400 meters above sea level. (Lailakdistriktet). In the north lies Lake Issyk-Kul and forms a high-lying pool, 1608 meters above sea level, between the Kungej-Alatau and Terskej-Alatau mountain ranges. The Republic’s only lowland areas are the vast plains around Bishkek, and the westernmost part, which includes the eastern shore of the Fergana Basin.

The mountains are mainly grassy, ​​but in some areas, especially in eastern Kyrgyzstan, there are limited areas of pine forest. The most important rivers in the country are Naryn, which originates in the eastern mountainous regions and flows into Syrian Darja in eastern Uzbekistan and Chu, which once originated in Issyk-Kul. Tsju runs on the border of Kazakhstan and eventually disappears on the dry steppes of southern Kazakhstan.

Climate and vegetation in Kyrgyzstan vary with height. Except in the peripheral lowlands, winters are relatively cold, and there is often a lot of snow. The summers, on the other hand, are hot and dry, except in the higher mountain regions. In the valleys, the average temperature in July is 28 °C, while in January it drops to -18 °C. The highest measured temperature is measured in the area around Bishkek (44 °C). The lowest temperature is measured in Ak-Sai (-54 °C). The precipitation varies between about 500 and 1000 millimeters in the mountains, but in sheltered valleys and pools can be as low as 250 millimeters. The capital, Bishkek, has between 220 and 240 days of sunshine a year.

Alpine and subalpine vegetation with a species-rich flora occupies most of the area. In the highest mountain areas there is cold desert and no continuous vegetation. In the valleys there are some coniferous forests with, among other things, spruce.

The high mountain fauna of Kyrgyzstan has great similarities to those found in Afghanistan and Kashmir. The mammalian fauna comprises 83 species. The rare and endangered snow leopard resides on remote mountain plains and in mountain forests. Among the larger mammals are also bears, wolves, lynx and wild boar. Marmot and several species of pikas or pipe sharks also live in the mountains.

168 bird species nest and a further 200 occur on the move or as random guests. Among the birds of prey there are lamb vultures, eagles and falcons. Other high-altitude birds include the big Tibetan hen, alpine crow and quay, wall crawler and many finches. 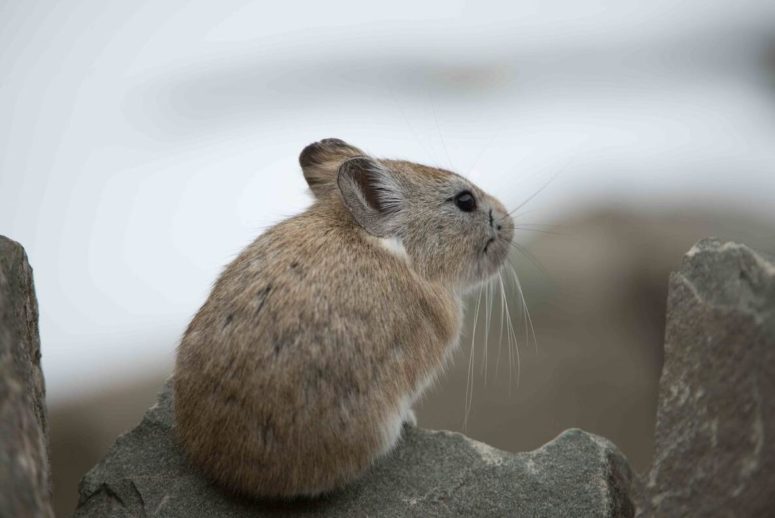 Big earpipe sharks O. macrotis live in the Himalayas, at altitudes 2,500 to 5,700 meters above sea level, in stone watches.

At least 30 reptiles and 7 amphibians occur.