Iran is a country in Western Asia. It borders Iraq, Turkey, Azerbaijan and Armenia in the west and northwest, Turkmenistan in the northeast and east, and Afghanistan and Pakistan in the east and southeast. The name of today’s Iran was Persia until 1935. The highest mountain in Iran is the 5,671 meter high Damavand in the Elburs Mountains. In the north, the country borders on the Caspian Sea. In the south and southwest a 2,000 km long coast leads to the Gulf of Oman and to Persian Gulf, which are separated by the Strait of Hormuz. Iran is currently divided into 30 provinces called Ostans.

Tourists will find not only in Iran enique natural landscape, the cultural treasures of Iran are partly older than Islam. Even if the vacation comes with some hardships, travelers are rewarded with sights of 4,000 years of history that go back to the roots of human culture.

The official language of Iran is the Persian language, an Indo-European language. Persian is the most widely used Iranian language and also the most important of all languages ​​spoken in Iran. Around 58 percent of the population speaks Persian as their mother tongue. Other languages ​​in the country are Azerbaijani, Turkmen and Kurdish. Arabic has little meaning in Iran. In total, around 77 different languages ​​are spoken in Iran.
Many people also associate the Persian carpet with the country of Iran. This is actually an important cornerstone of all Persian art and culture and is also widespread in Iran. The impressive craft of carpet knotting, which requires a lot of skill and dexterity, is firmly linked to the cultural development of Iran. The first Persian carpets already existed in the Bronze Age.

Form of government: Iran has been an Islamic presidential republic since 1979, the constitution dates from the same year, additions were made in 1989. The 12-member Constitutional Council (Guardian Council) has been monitoring the compliance of laws with Islamic law (Sharia) since 1989. The Iranian parliament has 290 members.

Religion: Muslims 98% (including Shiites 89% and Sunnis 9%); Minorities from Zoroastrians, Jews, Christians and Baha’i 2%.

The time difference to Central Europe is + 2:30 h all year round.

There are seven countries bordering Iran: Armenia, Azerbaijan and Turkmenistan in the north, Afghanistan and Pakistan in the east, and Iraq and Turkey in the west.

In the north there is access to the Caspian Sea (567 km of coastline), in the south over a 2,000 km long coast to the Persian Gulf and Gulf of Oman (separated by the Strait of Hormuz).
The Strait of Hormuz (between Bandar Abbas and the island of Qeshm) is an important oil route. Oman and the United Arab Emirates are less than 50 km away.

The country is dominated by mountains, several mountain ranges with fertile valleys run through Iran almost parallel in a south-easterly direction. In the Kuhrud and Zagros mountains, the 4,000 m are exceeded several times.

In the east of the mountains, large deserts such as Dasht-e-Kavir or Dasht-e-Lut stretch out, in central Iran there are large salt pans. Agriculture is only possible in the area of ​​oases or artificial irrigation through Qanatas (irrigation channels).

Both the west and the fertile northern region on the Caspian Sea (Elburs Mountains) of Iran are characterized by mountain landscapes.

Earthquakes are common in Iran and are attributed to shifting continental plates.

The highest elevation in Iran at 5,671 m is the extinct volcano Damavand in the Elburs Mountains, located in the north-east of Tehran. The Caspian Sea is only about 60 km from the summit, at this distance there is a height difference of almost 6,000 m, such an increase is not even achieved in the Chilean Andes.

This map of the population distribution in Iran was created by the Worldmapper team. Densely populated areas appear bloated, the area of ​​sparsely populated areas is reduced. The shape of the grid has been preserved; an underlying map with the original geographical extent helps interpret the map. The distorted map should help to present abstract statistical information clearly. 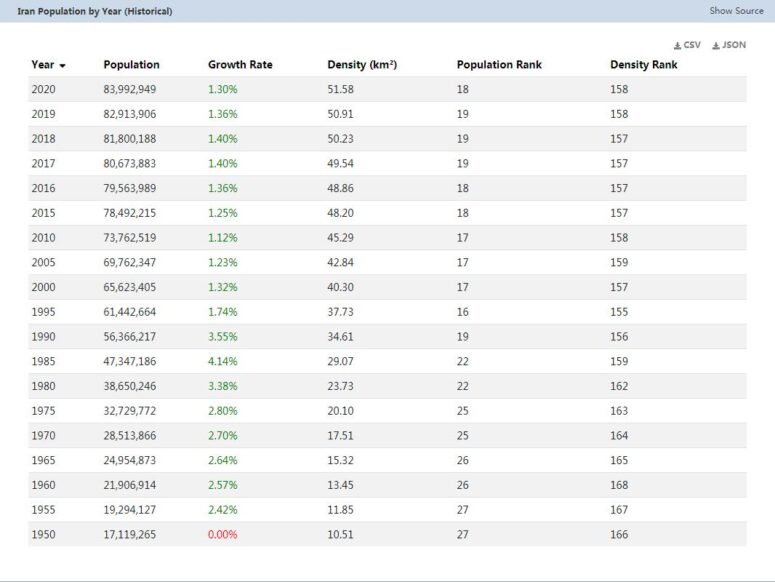 The climate in the different regions of Iran is very different. Mainly dry conditions occur, however, the annual rainfall can reach 2,000 mm, especially in the northern part of the country at the Caspian Sea and partly also in mountains. The salt lakes in the state center are the driest.

The seasons are clearly differentiated: spring begins in March and is initially cold and windy, later pleasantly warm and often sunny. Spring and autumn are among the best travel times in Iran. The summer begins in June, is predominantly warm, but also partly in hot sunshine interrupted by rain. July is the warmest month, with temperatures between 35 and 45 ° C. The autumn begins in September and is warm and sunny before wet and beginning to November is foggy. The winter lasts from December to March, during this time there can be significant snowfall regionally. January and February can be bitterly cold, often with night temperatures from -15 °C to -20 ° C, but the days are often pleasantly mild, especially in the south of the country.