Indonesia is the largest island nation in the world. The capital Jakarta is located on the island of Java, where more than half of the inhabitants live. Indonesia includes the six main islands of Sumatra, Sulawesi, Java, Bali, Kalimantan (part of Borneo) and West Papua (western half of New Guinea) and 30 other smaller archipelagos. Indonesia has a total of more than 17,000 islands, of which 6,000 are uninhabited. The islands of Indonesia are crossed by mountains, the volcanoes of which are still largely active today.

Bali is the most famous and most accessible island in Indonesia. Every year, countless tourists enjoy the wonderful sandy beaches, the cultural sites and the colorful nightlife. But many of the other islands are also worth a visit.

The island of Sulawesi, also known as the orchid island, is a true paradise for nature lovers. Imposing mountains, in which lakes and geysers are embedded, as well as the exotic butterfly garden in the Bantimurung Nature Park make hearts beat faster.

The national anthem, the Indonesia Raya, was written and composed by Wage Rudolf Soepratman. Indonesian musical instruments such as the gamelan and angklung also sound out there. These instruments are typical of Indonesia and can be found in almost every traditional piece of music.
Another tradition in Indonesia is Wayang. This is a kind of shadow play.

In Indonesia there are two cultural influences: Buddhism and Hinduism. From the 9th to the 10th centuries, Buddhism in Indonesia was particularly important in culture, music, literature and painting. From the 13th century it was Hinduism that shaped people.

Many people know batik from their t-shirts, but this is already a real art in Indonesia. Wonderful flower and bird patterns are created in an elaborate way, which cannot be compared with the self-made shirts in Europe.

Capital: Jakarta on the island of Java (8.6 million inhabitants, 2006)

Form of government: Indonesia has been a presidential republic since 1945, the constitution dates from the same year. The last constitutional change was made in 1969. The unicameral parliament consists of a House of Representatives ( Dewan Perwakilan Rakyat ) with 550 members. Indonesia has been independent of the Netherlands since August 17, 1945.

Head of state and head of government: President Susilo Bambang Yudhoyono, since October 20, 2004

Language: The official language in Indonesia is Bahasa Indonesia (a modified form of Malay). The different ethnic groups speak around 250 languages ​​and dialects, the most common is Javanese. Large parts of the population speak English and Dutch.

Indonesia the largest island country in the world with an east-west extension of 5,120 km and a north-south extension of 1,760 km. The country has an estimated 17,500 islands, only 6,000 of which are inhabited. The five main islands are Sumatra, Java, Borneo (Kalimantan in Indonesia), Sulawesi and New Guinea. Two large archipelagos are Nusa Tenggara and the Moluccas, and there are also 60 small island groups.Indonesia shares three of the islands with other nations: Borneo with Malaysia and Brunei, Timor with East Timor, and New Guinea with Papua New Guinea.

Here you can find accurate topographic maps of Borneo, Java and New Guinea.

The landscape of the individual islands is very different; some are characterized by mountains and plateaus, while others consist mainly of flat coastal plains and alluvial land.

Geographers group Sumatra, Java (and Madura), Kalimantan (Borneo Island) and Sulawesi to the Greater Sunda Islands. With the exception of Sulawesi, these islands are located on the Sunda shelf, an extension of the Malay Peninsula and the Southeast Asian mainland. Papua, in the far east of Indonesia, occupies the western half of the world’s second largest island – New Guinea. The water depths in the Sunda and Sahul Shelf average 200 meters or less. Between these two shelves are Sulawesi, Nusa Tenggara (also known as the Little Sunda Islands), and the Moluccan Islands, which form a second large group of islands in waters up to 4,500 m deep.

Tectonically, the region – especially Java – is very unstable, and although volcanic ash has led to fertile soils, agricultural conditions in some regions are unpredictable. There are numerous mountains and around 400 volcanoes in the country, of which around 150 are active. Between 1972 and 1991 there were twenty-nine volcanic eruptions, mostly in Java. The strongest volcanic eruptions in modern times occurred in Indonesia. In 1815 a volcano erupted on Gunung Tambora on the north coast of Sumbawa, in the Nusa Tenggara Barat province, claimed 92,000 lives and caused a “year without summer” in different parts of the world. In 1883, Krakatau broke out on Sunda Street between Java and Sumatra, and around 36,000 West Javanese died in the tidal wave that followed.

The Maluku Islands (Moluccas) are geologically one of the most complex of the Indonesian islands. They are located in the northeastern sector of the archipelago, bordered by the Philippines in the north, Papua in the east and Nusa Tenggara in the south. The largest of the Moluccan Islands are Halmahera, Seram and Buru, all rising steeply from the very deep sea here. Due to this extreme relief between deep sea and high mountains, there are hardly any coastal plains here.

Geographers believe that the island of New Guinea, of which Indonesian Papua is a part, was once part of the Australian continent. The detachment and the subsequent tectonic actions created both the huge, snow-capped mountains along the central east-west axis and the hot, humid plains along the coast of New Guinea. The Papua Mountains extend about 650 km from east to west and divide the islands between north and south.

This map of the population distribution in Indonesia was created by the Worldmapper team. Densely populated areas appear bloated, the area of ​​sparsely populated areas is reduced. The shape of the grid has been preserved; an underlying map with the original geographical extent helps interpret the map. The distorted map should help to present abstract statistical information clearly. 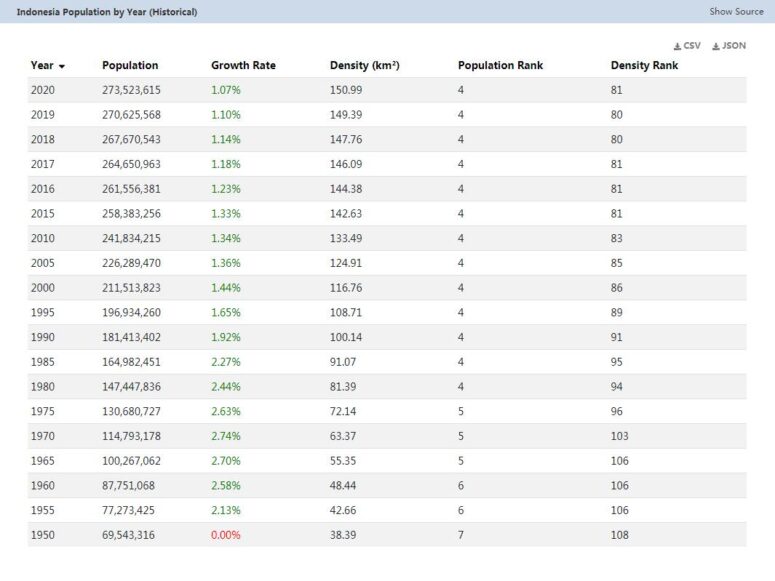 Lying on the equator, Indonesia has a relatively even climate – hot. It is hot and humid during the rainy season (October to April) and hot and dry during the dry season (May to September).

The islands of Sumatra, Borneo, Papua, West Java, Sulawesi and the Moluccas have a humid tropical climate. Temperatures fluctuate only slightly over the course of a year, the average temperature is between 25 °C and 27 ° C. The air humidity is very high at 90%. The annual rainfall varies between 2,000 and 4,000 mm. Due to these climatic conditions, one of the world’s largest rainforest areas was able to develop here.

On the small Sunda Islands, the rest of Java and the Aru Islands, the monsoon determines the climate. Temperatures are consistently high throughout the year, but daily fluctuations of 6 to 12 °C can occur. The northeast monsoon is mostly dry, so there is a dry season during the winter monsoon. The southwest monsoon, on the other hand, takes moisture above the warm sea and brings high rainfall, often flooding.