Family and relatives: The meeting with a Uzbek always quickly includes the acquaintance of his family. From an Uzbek perspective, having no family seems either unthinkable or a particular misfortune. The family is a socially highly respected value in Uzbek society. However, the high status of the family among Uzbeks should not be romanticized, which they often do with Western foreigners: The individual is indeed made by his / her grandfather / family downright “enslaved” and is therefore hardly capable of independent, individualized action. Most vital decisions are made against the background of the family. Again, this should not be understood in an essentialist way, there are social reasons for this.

Being related creates a kind of “trust” among individuals. It forms a means of legitimizing social relationships and determines the direction of the individual’s life path (place of residence, choice of allies or friends). When two Uzbeks meet, the first time they will try to find out whether they have no common ancestors or will look for some other connection between them. If it is impossible to establish a family relationship between the two, a larger category is used (the village, regional or national background). Only then will it be possible to determine the nature of the relationships between the one and the other in what follows.

The term of kinship, “qarindosch”, allows a distinction between those who belong to “our” group and other individuals who do not belong to it. The stranger, “chetellik”, or “aschnobi”, the stranger, is seen as a source of disorder. He has no access to the inside of the family and cannot inspire trust.

According to ethnicityology, the Uzbeks also have a term in between, which plays an important role in social relationships. The concept of the invitee, “mehmon”, makes it possible to build a barrier between us and the others. Even if the invitee is someone who has access to the family space, he only has it for a limited time in a well-defined place. Being related therefore contains both a dimension of integration and one of exclusion.

The expulsion from the family group includes social death, which causes the worst pain any member of Uzbek society can suffer. The growing number of female suicides can therefore be explained by the frequency of such exclusions, the victims of which are many young women in rural areas. Exclusion drives these young women to choose death as the only honorable way out and the only possible expression of rebellion (after: Boris-Mathieu Pétric: Pouvoir, don et réseaux en Ouzbékistan post-soviétique, Paris 2002, pp. 57-59)

The Sovietization of Central Asia permanently transformed the local communities. In the rural areas, both the mahallas organized in villages and the tribally organized villages were converted into kolkhozes or integrated into them as departments and labor brigades. The mass emigration of Europeans and the influx of rural residents, which accompanied the collapse of the Soviet Union, led to a “mahallization” of the formerly strongly European residential areas in Uzbekistan. Through the nationwide establishment of Mahalla offices with a Rais as a state-paid community leader and the transfer of welfare state competencies, this structure in Uzbekistan was also extended to the Soviet-European city quarters and settlements with multi-storey apartment buildings.

A male descendant enjoys a much higher status in Uzbek society than a female. Many mothers or their families only feel “relieved” and “redeemed” when a boy is born. Among other things, this leads to the fact that in many families children are conceived until a boy is “finally” born.

This unequal status also has later implications: more is “invested” in boys (symbolically and materially) than in girls. As a result, for example, higher education is not considered as necessary for a girl as it is for a boy. In addition, there is much greater social pressure on young women to marry young. In the imagination of Uzbek society, a single, regardless of age, has the stain of “depravity” and is unable to lead a happy life. This flaw needs to be remedied as quickly as possible by marriage, which is quite expensive.

Six regional informal networks are important for the political and economic fields of Uzbekistan: three from the Fergana Valley, one each from Bukhara, Samarkand and Tashkent. The first president of the country as well as the current incumbent owe their rise and career to the network from Samarkand. Nevertheless, the first and current president are trying to reduce the influence of regionalism in favor of the state apparatus and to strengthen a national identity. So far without success, because there is no civil society that could stabilize the country. Karimov, the first president of Uzbekistan, involved oligarchic groups formed from the respective informal networks in his system of rule, but at the same time feared them. Hence a constant rotation of decision-makers at national, regional and local levels so that these groups do not accumulate too much political and economic capital. If they get out of control, as in Tajikistan in the 1990’s, Uzbekistan is also threatened with civil war and violence. Mirziyoyev is currently trying to transform the regionalist system of rule into a somewhat more stable oligarchic one based on the Russian example. 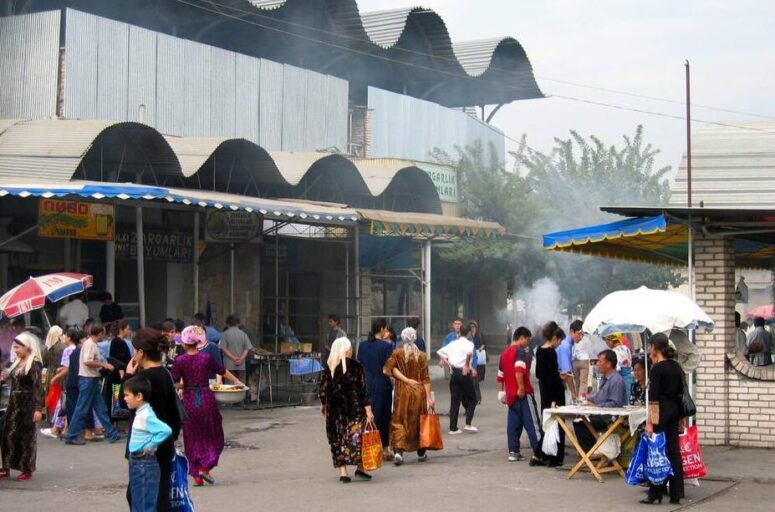