Following the constitution of 1949, in force from 1950, India is a parliamentary- democratic and republican federal state.

The executive power is led by a government, based on and accountable to Parliament (House of Commons). The head of government, the prime minister, is the real political leader in India. The head of state, the president, is elected for five years by an electoral college consisting of Parliament’s two chambers and the state assemblies, and has the most titular functions.

India was a British colony until 1947 and is a member of the Commonwealth of Nations. 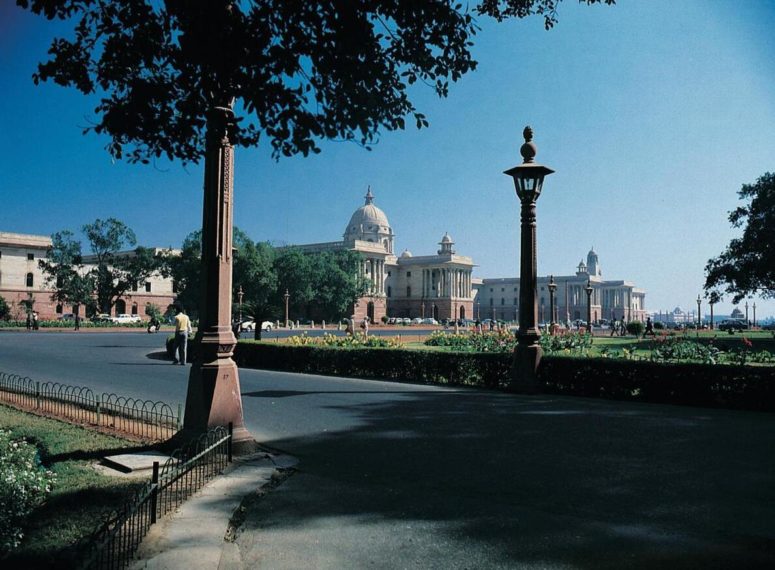 India. Government buildings in New Delhi, built by the British in the 1930s. The Viceroy’s residence in the same complex is now home to the Indian president.

Legislative power has been added to a two-chamber parliament, Sansad, consisting of the 245-member State Council (Rajya Sabha) and the 545-member People’s House (Lok Sabha).

One voter has two votes, one for the state assembly and one for the Lok Sabha. Both elections are made in a constituency where the candidate with the largest percentage of votes wins the election. It has little to say whether the candidate has 20 or 60 percent of the vote, as long as no one else has more.

A united parliament elects the president, who in turn appoints the prime minister according to the wishes of dominant parties. The prime minister then forms the government, which must have the support of a majority in parliament.

The executive power is led by a government, based on and accountable to Parliament (the House of Commons). The head of government, the prime minister, is the real political leader in India. The head of state, the president, is elected for five years by an electoral college consisting of Parliament’s two houses and the state assemblies, and has the most titular functions.

Since then, Indian politics has been dominated by one party, the Congress Party. For most of the time, the party and government have also been led by members of one family. From the 1990s, the Congress party was divided into several factions and Indian politics have not been as stable afterwards. No new center of gravity in politics has emerged after the Congress party’s weakening. The rising religious tensions have led to growth for religiously based parties, and regional contradictions have led to stronger support for regional parties. Ethnic contradictions also characterize politics.

India comprises 28 states, each ruled as independent parliamentary democracies, with a people-elected assembly (elected for five years) and a government accountable to the assembly (but appointed by the president). Five states have bipartisan assemblies. In addition to the states, there are six union territories as well as the metropolitan area, led by their own administrators appointed by the president. The Delhi and Pondicherry territories also have elected government leaders and assemblies. If a state government does not function properly according to the constitution, the state can be put under direct presidential rule, which has happened from time to time.

Over a period of time there has also been a transfer of authority from the states to local units, with village councils (Panchayat) and village assemblies (Gram Sabha).

Legislation from before independence, which was quite dissimilar and characterized by British, Hindu, Islamic and other traditions, has been retained as long as it does not conflict with the Constitution but has gradually been replaced by new central legislation. The Union has exclusive legislative authority in areas such as foreign, defense, monetary and banking and has been given competing authority in areas such as criminal law, procedural law, family law and some other jurisdictions. Family law (divorce and so on) can still be practiced according to the rules of individual religious communities.

The courts form a common hierarchy. As in the United States, no distinction is made between federal and state courts. The Supreme Court is the Supreme Court, with a presiding judge and up to 25 judges, appointed by the president; they cannot be set aside before retirement age without a decision in the two parliamentary chambers. The Supreme Court is appellate, but initially judges in matters concerning the relationship between the union and the states or states among themselves and in the enforcement of constitutionally guaranteed freedoms. The Supreme Court can test the constitutional compatibility of Union and State laws. Such trials have sometimes created political-constitutional tensions.

In each state there is a supreme court whose judges are appointed by the president. In a criminal case before a supreme court, a jury participates. The scheme varies for minor dishes. Each state has its own district courts. At the village level there are lay judges.